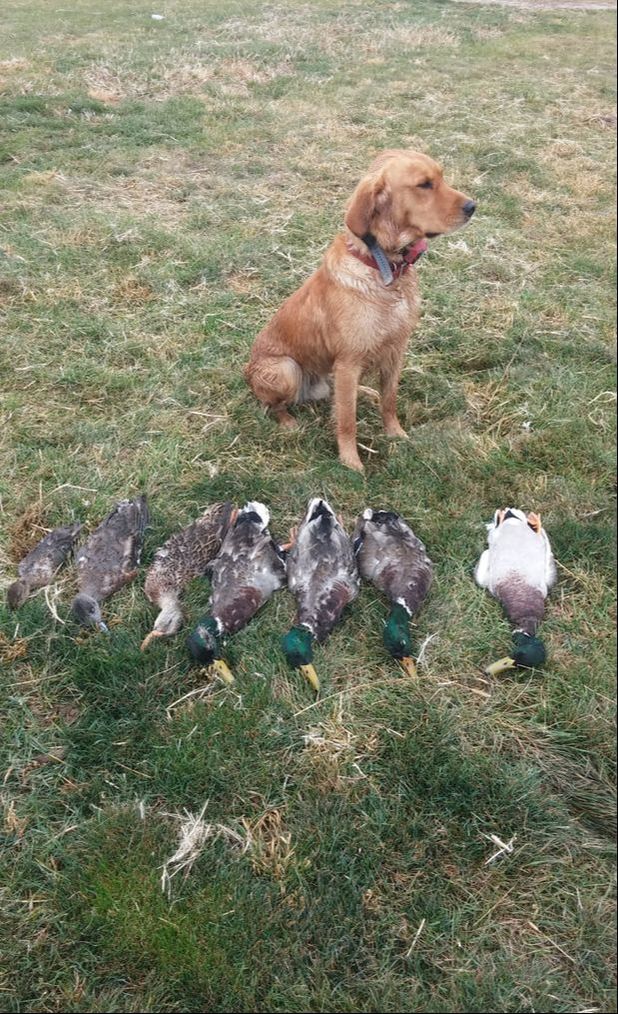 Golden Hunting 12 Gauge also known as "Gauge" is our sire. Gauge is fully registered with the AKC, has a great Pedigree, and comes from amazing field hunting lines.
Gauge is a great dog. He is extremely athletic, fast, strong, has lots of drive, and naturally loves to retrieve. He has a good nose, and loves to hunt. He is also a wonderful swimmer. Even when the water is icy and cold, he is eager to jump in and get his birds.
Gauge is also a good, playful friend. He is extremely friendly and has never met anyone he didn't like.
He has a nice masculine broad head, a dark red field coat, and is muscularly built.

A Little about Gauge's Pedigree:
Gauge's father, MK'S Rowdy Boys Raisin A Ruckus, also known as "Rowdy" received his AKC Junior Hunter Title at only 10 months old.  And he has now received many hunting awards such as his Hunting Test Title Certificate from the American Kennel Club. He has also been awarded the degree of excellence as "HR" and "SHR" with the United Kennel Club.
Gauge's Mother, Goldenrod Macey also known as "Macey" has an outstanding pedigree of field & hunting dogs from English lines and from the widely known "Frisbie Kennels" out of Waverly, MN. Macey is an athletic dog that loves to work hard in the field and is an excellent proven bird hunting dog. She is extremely birdy with a heart to please in any setting. She is a powerhouse retriever, loving land and water. Macey had over 2 months of professional training with Dan Hosford of Medical Lake, WA. Dan, a highly experienced and known gun dog trainer, liked what he saw in Macey as he worked with her. He saw her solid willingness, her solid desire to please and learn, and to work hard daily. Her training has continued at home to keep her work ethic strong.
​Rowdy's Sire is Heldt's Mr Strike 3 Your Out, also known as "Striker". Striker was in the top 10 producing sires in the August/September 2011 magazine. He is registered with both the American Kennel Club & the United Kennel Club. Striker proved himself in the field by 7 months old. He had 3 started passes toward the SHR Title. At 11 months old, he passed the started level and received the SHR Title.  He received his HR Title soon after and also his UH Title. Striker also earned his "Hunting Retriever Champion" Title. In Striker's impressive run of titles, he only misfired in 2 tests on the way to 3 titles in 10 months he reveived his HR, UH, and HRCH titles. Striker earned his 500 points and was inducted into the 500 pt. club with HRC. He then reached the 1000 pt. club. Striker is the 4th Golden Retriever to reach this in the history of HRC. Now he currently has 1500 pts. Very impressive!

Rowdy’s dam”Emma” is a beautiful golden girl. She loves to perform, she has attitude and tons of personality and loves the attention. She is an excellent marker who runs hard and plays hard. She is duel registered with the AKC & UKC. Emma has recently earned her UH title through the “United Kennel Club” and is working on her other titles. 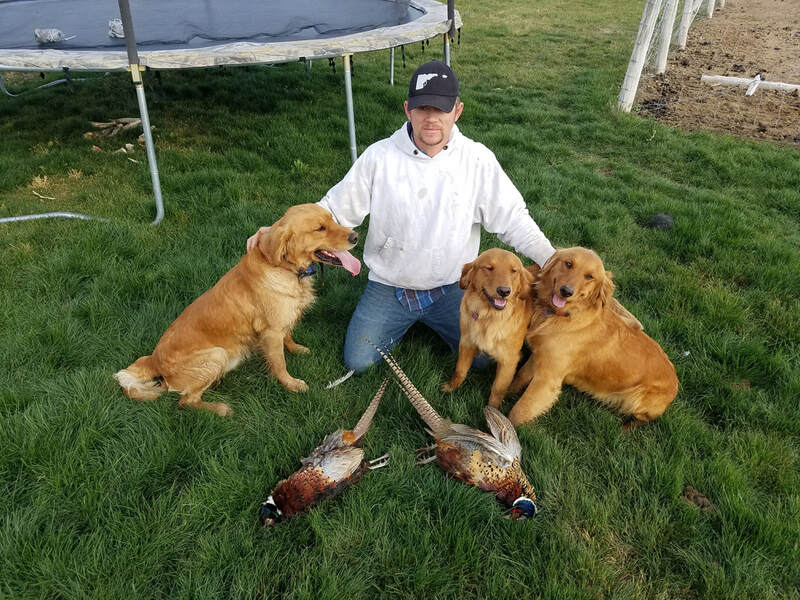 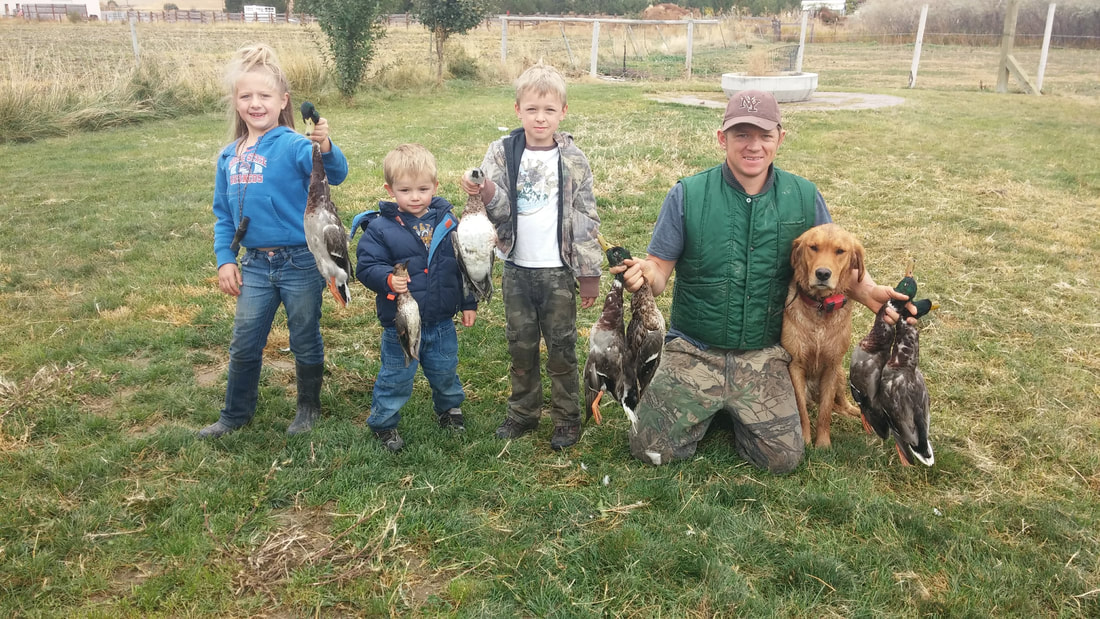 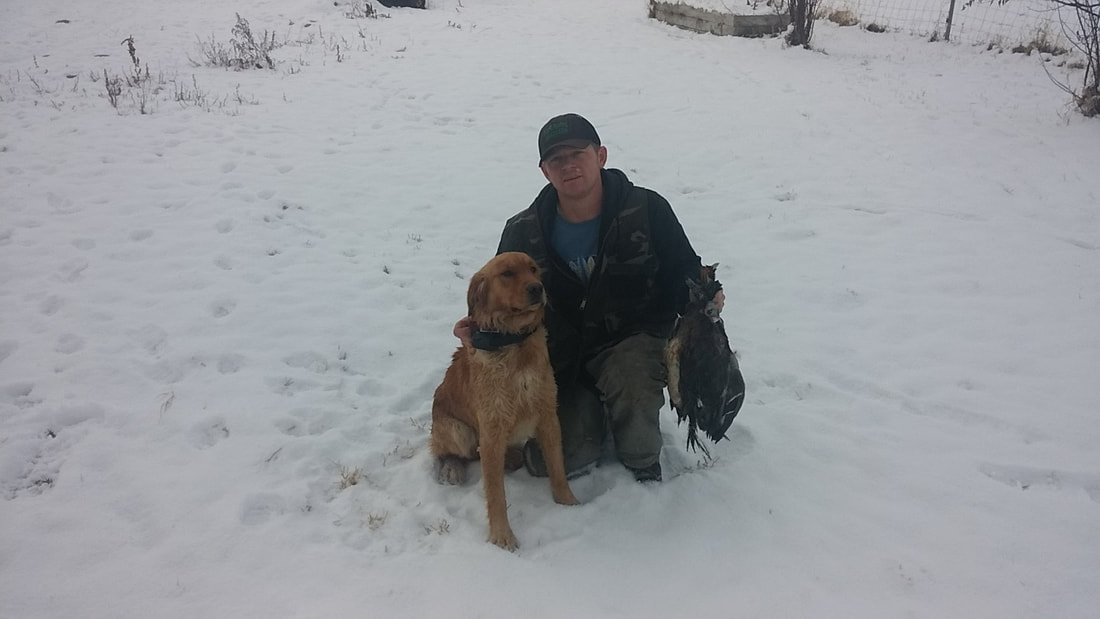 Video of Gauge at 8 months old. He loves to retrieve!